The First Mention of the Gospel 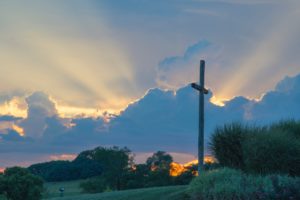 The context of Genesis 3:15 is the judgment of God on the sin of Adam and Eve. Chapter 3 opens with a description of a particular snake, one that the Bible later indicates in Satan. This snake spoke with Eve questioning the truth of what God told her (v. 4). This lie was intended to murder both Adam and Eve because the promise of judgment upon sin was death, something Eve admitted (v. 3). After Adam and Eve sinned, God found them hiding (v. 10). They were afraid of God because of their sinfulness. When Adam admits their sin (v. 12), God pronounces judgment. However, before judging Adam and Eve, He judges the snake, Satan. Look at v. 15.

15 And I will put enmity between thee and the woman, and between thy seed and her seed; it shall bruise thy head, and thou shalt bruise his heel.

God Promises Salvation Out of Judgment

This promise of the gospel arises from the among the three judgments God levies after Adam’s sin. Satan is judged (vv. 14-15), Eve is also judged (v. 16), and finally Adam is judged (vv. 17-19). The judgment on Satan is because of his successful attempt to murder the two humans. His lies to Eve create the environment in which Adam and his wife sin against God. The judgment is clear. Because of Satan’s lie, he would be God’s enemy for all eternity. Eve was also judged but in a different way from the others. The statement against her does not include a condemnation of guilt. There is no “because you have done” or “because this is what you did” statement. Rather, her judgment is the result of the sin of Satan and Adam. Finally, Adam was judged by God for his disobedience. God specifically states that disobedience was his sin. He listened to his wife instead of to God (v. 17a). He ate the fruit from the tree that God had forbidden in direct violation of the command (v. 17b). Consequently, his sin resulted in a life of toil followed by physical death. The sin of Satan and Adam plunged the human race into sin and brought the terrible judgment of God. The wages of Adam’s sin was death (Romans 6:23).

However, God did not leave Adam and Eve alone in judgment for their sin. As part of the judgment against Satan, God promises a Messiah who would bring atonement for their sin. God states that Satan would be overthrown. There are two interesting illustrative pronouncements that God makes. First, the snake, God says, will crawl on its belly. He will lick the earth. This humbling of the serpent is directed at Satan. Every occasion when you see a snake crawling on its belly, it is a reminder of how God has judged the Devil. Second, the snake’s head will be crushed. Skull-crushing is a common expression in the Old Testament that refers to someone being conquered. Balaam prophesied that a ruler would arise from Israel and would crush the foreheads of the Moabites (Numbers 24:17). Jael drove a tent peg into the skull of Sisera as part of God’s judgment against the wicked general (Judges 5:26). God promised to judge Israel because of its sin against Him by crushing their heads under the feet of others. Skull-crushing was a poetic expression of destruction. In this case, the head of the serpent (Satan) would be crushed under the foot of the woman’s seed, a reference to Jesus Christ. While the expression (woman’s seed) is not a support text for the virgin birth, what God is stating is that a human being (someone born of a woman) will arise and crush the head of the powerful spirit-being Satan. What is being explained in the text is that Satan will be destroyed.

The Cost of Victory

While the woman’s seed will crush the head of the serpent’s seed (Jesus conquering Satan), the heel of the Messiah will be bruised. In delivering the death blow, Christ will suffer harm. This is an obvious reference to the Cross. The suffering of the God-man, our Savior, the Lord Jesus at the hands of the Romans outside of Jerusalem is described as the bruising on His heel. The cost of our victory was the death of Jesus. Think about it: on the very day Adam sinned against God, the Lord provided Him with a means of salvation. This salvation is promised through the cross-work of Jesus Christ. While He was wounded on the tree, our enemy Satan was defeated.