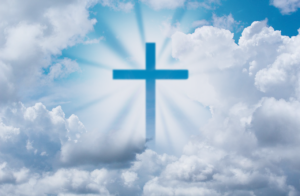 It is through the gospel alone that we are saved. We believe that Jesus died for our sins and rose from the dead. The result of His work on the cross is total liberation from the power and penalty of sin and the hope for a future eradication of the presence of sin. The apostle Paul wrote the Colossian Christians that when he learned of their salvation, he began to continually thank God the Father for saving them. He wrote: “when you heard the truth of the word of the gospel, it brought forth faith in you.”

Salvation provides an inheritance of holiness with other believers.

12 Giving thanks unto the Father, which hath made us meet to be partakers of the inheritance of the saints in light:

By returning thanks to God the Father, Paul infers that the gospel itself originated with God. Mankind did not discover a spiritual need and then seek out God for some divine remedy. Rather, God determined that man was in bondage to sin and needed rescue. Consequently, we are the beneficiaries of gospel truth. We receive both grace and peace from God the Father (v. 2). The result of this is an eternal inheritance in Christ. The gospel makes one a recipient of God’s spiritual blessing (partaker). There is a portion which is given to every believer (inheritance). This portion relates to one’s being separated unto God (saints). This inheritance is holiness to the Lord (in light).

13 Who hath delivered us from the power of darkness, and hath translated us into the kingdom of his dear Son:

Before a person is saved, he is dead in trespasses and sins (Ephesians 2:1). Salvation is a rescue operation that God initiates to reach people who are trapped in Satan’s kingdom. Literally, God rescues people from sin. The tense of the verb (delivered—v. 13) indicates that this rescue occurs at salvation. God reaches down and delivers those who are enslaved by sin and “delivers” them. It liberates people from the power of Satan. A saved person is no longer under the authority of sin. Spiritual darkness is no longer his natural habitat. While saved people sin, sometimes grievously so, sin is not the natural domain of the saint. He is no longer spiritually dead. He is alive to righteousness that is in Christ Jesus. The way the apostle Paul uses the word “darkness” (the spiritual deadness of the unsaved) has no relationship to the life of the believer. To be saved means to have one’s allegiance transferred to the kingdom of Jesus. The redeemed of the Lord are ruled by him. This transfer of kingdoms is incredibly important. Positionally, everyone who is saved is moved from the kingdom of Satan to the kingdom of Christ. Everyone who knows Jesus is moved from the kingdom of sin to the kingdom of righteousness. Practically, that should be true too. To be in Jesus’ kingdom is to acknowledge that He is the King. It is to willingly submit to His rule over the life. Saved people have no business operating in the kingdom of Satan or having anything to do with him.

Salvation erases the debt of sin.

14 In whom we have redemption through his blood, even the forgiveness of sins:

The final thing that salvation does is it eliminates the debt of sin. The gospel of God (the Father originates the rescue of people enslaved by sin) operates through Jesus. We have redemption through the “dear Son.” Jesus is the one who does the redeeming. To be clear, the payment price to ransom someone from sin is the precious blood of Christ. This does not mean that God paid anything to Satan as some have supposed. Redemption is a term that Paul uses to demonstrate how serious sin is and how costly it was for Jesus to “redeem” people from its clutches. Jesus paid the sin debt by offering up Himself. The result is that all sin has been sent away. Those who have been redeemed no longer have any sin-barrier between themselves and God. Saved people are capable of relating directly with God the Father through Jesus. This is what it means to be forgiven. The weight of sin has been lifted. There is no longer any condemnation to those who are in Christ Jesus (Romans 8:1). While it is still important to confess that we are sinners and continually repent of sin, it is also a blessing to know that our salvation erases the debt of sin that was against us. We are declared righteous by God the Father (Romans 5:1).

“My soul was once a slave to sin, but Jesus died my soul to win,
He bought me with His precious blood and now I am a child of God.”